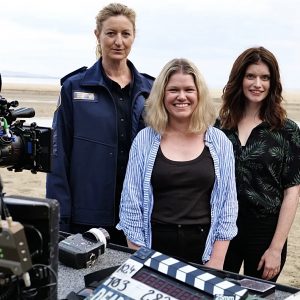 A luxury Tasmanian waterfront hotel, The Woodbridge, will be one of the sets used for a new TV series, Deadloch.

Discussion with the TV production team of Deadloch commenced in November 2021. Management later met with key personnel on site at The Woodbridge to run some test shots.

The Production Designer will be on site at The Woodbridge from tomorrow, and filming will commence next week.

Our luxury Tasmanian waterfront hotel will be used to represent the seaside Georgian mansion of the lead character.

From the creative minds of comedy duo Kate McCartney and Kate McLennan, the series will film exclusively in Southern Tasmania. The eight-part Tasmanian noir crime comedy will film from February to May 2022.

The Tasmanian town of Deadloch is preparing to launch the annual arts, food and culture Winter “Feastival”. This once sleepy seaside hamlet is left reeling when a local man turns up dead on the beach. Two female detectives are thrown together to solve the case. One is fastidious local Senior Sergeant Dulcie Collins (Kate Box). The other is a ‘rough as guts’ blow in from Darwin, Senior Investigator Eddie Redcliffe (Madeleine Sami). This odd trio has to put their differences aside and work together to find the killer.