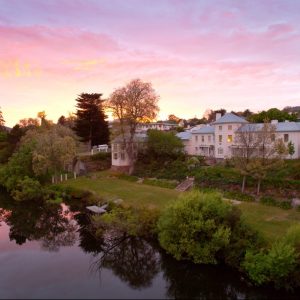 Tasmanian historic hotel garden has a tree that is almost 9 stories high.

Our Tasmanian historic hotel garden has an elm that is almost 200 years old.

It is a magnificent tree. In summer it provides glorious shade. Its Autumn colour is a joy to behold. But I love it most of all in Spring when its seed pods look like masses of flowers.

Recently I was examining this photo of Woodbridge, and realised that the tree was almost 9 stories high. And therein lies a story.

There used to be two elms side by side at the front of Woodbridge. One was much larger than the other, and the smaller was probably a sucker of the larger.
The trees were so healthy. They looked spectacular. So it was a source of concern when we realised the smaller was looking sick.

At first, we suspected that it had been poisoned. Perhaps the local council had been spraying the roads and spray had floated across to our garden.
But if the smaller was indeed a sucker of the larger, why wasn’t the larger being affected by the poison also?
We watched impotently as the smaller tree became more and more distressed.

Eventually we had to cut it down.

Its Death was a Mystery

We took samples and had them tested, but there was no evidence of poison or of disease. Its death was a mystery.

Then the answer to the mystery hit us. To explain we have to go back quite a few years.

When we purchased and began the restoration of Woodbridge, we quickly realised the infra-structure was poor. The electricals were just plain dangerous, so we had to completely rewire the property. The plumbing festooned the outside of the building and had to be re-connected, inside.

Then there was the sewage and the sewerage. It was quite shocking to realise that it all ran down the bank into the river. It had obviously done so for a long time.

No wonder therefore that the plants covering the riverbank cascaded in abundance down to the river. Everything was very well fertilised. No wonder the elms had grown so tall and robust.

But then, of course, we had had to totally rebuild the sewage and sewerage systems. We had cut off the constant and abundant supply of water and liquid, and not so liquid, manure.

We had in fact doomed the smaller tree. While there was so much feeding the trees, both could prosper. Now the larger tree was demanding the majority of the water and nutrients.

There was the answer to the mystery.