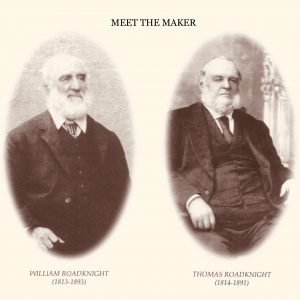 Tasmanian Colonial History was moulded by people like William and Thomas Roadknight.

The Woodbridge played an important part in Tasmania’s colonial history, and is one of Australia’s oldest houses.

It was built by William Roadknight in the early 1800’s and was completed in 1825. Therefore, it is nearly 200 years old.

The brothers William and Thomas Roadknight set sail for Tasmania in 1807 with their father. The father died en route, and the brothers embarked in Tasmania determined to make their mark.

William became the Constable/Magistrate for New Norfolk (then called Elizabethtown). Elizabethtown was at the top of the tide’. This meant that it was as far upriver as seagoing vessels could safely go. And ships could safelyanchor here in the days before Hobart had wharves.

Hence Elizabethtown was the most important town and de facto capital of the founding colony.

Williams’s position was therefore one of substantial significance and prestige in the government of the new colony.

Brother Thomas meanwhile, became a gentleman farmer, establishing the large historic estate of Ivanhoe just 10 minutes further north. Thomas later relocated to Victoria where he played an important role in the history of that state.

Woodbridge was strategically placed at the ‘top of the tide’.

Part of William’s job description was to oversee the comings and goings of the shipping. The ships brought their goods from the old world, sailed up and anchored in the river at Elizabethtown. There was storage sheds and silos on the far side of the river. Row boats would scuttle between between the ships and the warehouses ferrying goods.

Meanwhile, other rowboats would ferry the passengers to the opposite ‘town’ side of the river. The original ferryman’s cottage is still standing across the road from The Woodbridge.

It made sense therefore that William sought to build a house at the top of the tide. He was granted a substantial parcel of land on the banks of the Derwent and proceeded to build Woodbridge. The original house comprised the three levels of the central tower and the rooms either side. It was built for what was then the princely sum of 1000 pound.

William only lived there for a short while. Within a few years, he was convicted of killing a convict servant, and sent to Sarah Island himself.

However, resourceful and honourable man that he was, William soon reversed this disgrace …. but that is another story.