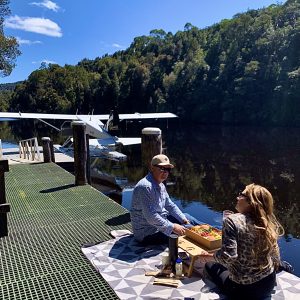 Hobart’s Top Luxury Experiences must include a seaplane to land on the Gordon River. recent guests said it was “Awesome!”

If you are looking for Hobart’s top luxury experiences, look no further than the seaplane trips from our river pontoon.

My absolute favourite is a seaplane flight to land and picnic on the upper reaches of the Gordon River. It is memorable because of the spectacular in-flight scenery and the jaw-dropping landing between cliffs.

And for those of us who are of a certain age, it is memorable for the 1980’s blockade.  Conservationists took to the Gordon Franklin in kayaks to save the area from being dammed.

The Gordon (and Franklin) River was the site of protests in the wilderness 1978-83. The aim was to stop the building of a dam on the upper reaches of the Gordon River. The dam would have flooded vast areas of pristine wilderness.

In the 1960s-70s, three dams were built flooding pristine wilderness surrounding Lake Pedder. There was a growing outcry denouncing the desecration of Tasmania’s wilderness wonderland..

The protesters garnered widespread public support throughout Australia, and even overseas. They eventually obtained an undertaking from Bob Hawke that he would stop the dam if he was elected as Prime Minister.

He was, and the dam on the Gordon River never eventuated.

The upper reaches of the Gordon, where your seaplane lands, is spectacular. But even more spectacular is the landing itself. Landing on any river is a thrill, but landing here is something else again!

Trees and gorges tower above as you taxi along the river to a small landing. From the landing you will walk through pristine wilderness to the delightful Sir John Falls.

Tarry a while to drink it all in. Henry will have a gourmet picnic hamper, and I expect a bottle of premium Meadowbank wine as well.

Treading the paths less trodden is often claimed, but seldom achieved. If is so special to be here, where so few have gone before.

Then back to the seaplane for the flight ‘home’ to The Woodbridge.

This experience is for up to 4 persons accompanied by a private pilot and guide. Book as Add-on to your reservation.