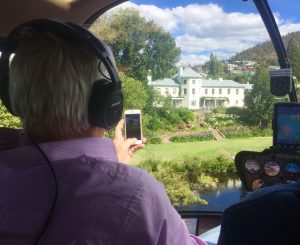 Guests arriving by helicopter have a beautiful introduction to Woodbridge.

Guest recently arrived at Woodbridge after flying all the way from Western Australia by helicopter. We joked that they must have just been hankering for a quick getaway break!

They very kindly asked John if he and I would be free to fly around the state with them, acting as their guide. It was a rare  priviledge because they were great company and we could go whereever we wanted.

We did make some valuable contributions, like impressing on the pilot that the weather was not like Western Australia, and that the cloud cover could come in quickly and unpredictably. At one stage we were caught in cloud for a few seconds, and it was indeed scarey as you are just encased in shining white and have no idea what is up or down – I was quickly disoriented.

We had a few adventures, such as landing on the top of a mountain in the middle of nowhere, and soaking in the 360 degree views.

And, when we went to Strahan, the weather closed in on us, and we had to land at Queenstwon, and stay the night – after a made dash to the supermarket to buy toothbrushes,  we went to dinner with movies in the old Queenstown movie theatre, where we saw ‘The Man from Snowy River’. It was a hoot of a night.

But the highlight, each day as we returned, was following along the river and seeing Woodbridge appear beside us. She took our breath away.