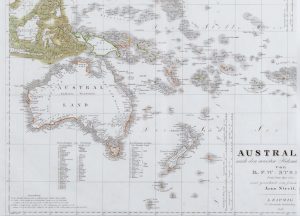 It doesn’t matter how often I recount the story of how New Norfolk got its name, it never ceases to delight me that we are living in part of Tasmania’s, indeed Australia’ s history.

New Norfolk is one of the oldest towns in Australia. It pre-dates Port Arthur and was originally know as Elizabeth Town, as shown on this historic map that hangs in the foyer.

Some time after, Norfolk Island was established as a penal colony. Originally it was being supported from the mainland, with boats ferrying goods and poeple across, but the intention was for it to become a self-supporting settlement.

After some years it became painfully obvious that Norfolk Island was not able to produce enough to support the colony, and that it was unlikely that it would ever be able to so, so the loaded up all the convicts and most of the free settlers, and set sail for Tasmania.

There were no wharves at Hobart at the time, and all shipping would sail up the river to the shelter at the top of the tide, at Elizabeth Town. The ships from Norfolk Island duly disembarked their human cargo, which greatly outnumbered the local population, and the transportees from Norfolk Island refused from the outset to call the town anything other than New Norfolk.

The authorities perserveded with the name Elizabeth Town for some years, but finally it became New Norfolk.